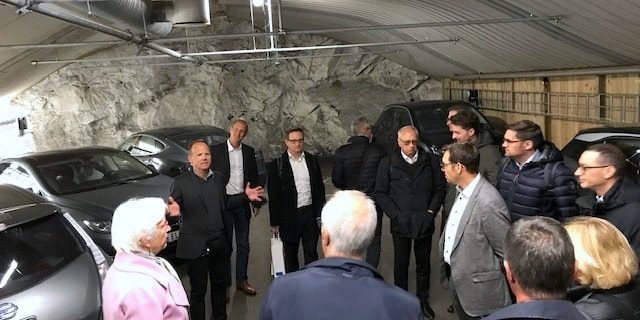 Visit from Baden-Württemberg, the delegation got an introduction to City of Oslo climate budget, EV policy and actions and guided tour to the worlds first EV charging garage at Akershus fortress.

A group of municipal and industry representatives was presented the brand new climate budget of the city of Oslo on the 25th of September. They also got a presentation of Oslo´s policies and actions within electromobility, and a guided tour to the world´s first charging garage for EVs at Akershus Fortress.

Visited Stavanger and the Oslo Region

The “Städtetag Baden-Württemberg”, under the direction of Mrs. Gudrun Heute-Bluhm, visited Norway for their yearly delegation trip. The group included 18 municipal representatives of Baden-Württemberg, mayors and “Landrat”. One of the organizations current projects is named “Innovation Partnership for Local Authorities and the Mobility Sector 4.0”, dealing with smart and digital mobility. The four-day journey included a visit to Oslo ad well as the Nordic Edge Expo in Stavanger. The focus is on knowledge transfer and direct exchange with Norwegian cities, regions, companies and networks.

Jan Carsten Gjerløw, Green Visits, gave an introductory presentation about Green Visits, and describing some of the national and regional targets for reduction of climate gas emissions from road transport. The city of Oslo is paving the way, but is supported by high ambitions and actions also in Akershus county surrounding Oslo, and on national level. He also mentioned that Baden-Württemberg have a close cooperation on fostering the use of hydrogen for transport, facilitating cooperation on research, development of business models as well as market penetration.

Petter Christiansen, the Climate Agency, city of Oslo, presented the 2020 Climate Budget of Oslo. The budget was published by the City Government at the same moment as Petter presented, making the Baden-Württemberg delegation the first ones getting an insight in the budget numbers. The climate budget for 2020 helps to stake out the course towards Oslo’s ambitious climate targets for 2030. Greenhouse gas emissions should go down by 41 per cent in 2020 and 52 per cent in 2023, compared to the level of emissions in 2009. Analyzes made by the climate agency shows that there is still a way to go to achieve the ambitious goals, and to reach the 2030 target of 95 % reduction. None of the German municipalities are currently producing climate budgets, and they seemed quite impressed about the budget process an numbers presented.

Paal Mork, Agency for Urban Environment, city of Oslo, presented Oslo´s policies and actions to foster the deployment of EVs in Oslo. Several actions as a result of long-term strategies and plans have made Oslo the world´s capitol of electromobility. The city provides charging opportunities for the population in several ways. For instance the world´s first charging garage in the cellar of Akershus Fortress, only available for EVs and providing free parking and free charging for 10 hours for 85 vehicles. The delegation got a guided tour at the garage, learning for instance how the infrastructure was set up to manage a large number of vehicles charging at the same time.

The German delegation was eager learning about all aspects bout the city of Oslo´s actions and experiences, asking several questions to the presenters. Hopefully the experience can lead to a faster introduction of EVs in Baden-Württemberg municipalities. Mr. Mork underlined that Oslo and Norway would like to see more electric models brought to the market from German car manufacturers. “We like to speed up the deployment in Norway even more, so please help us motivate the manufacturers to speed up”, he said.